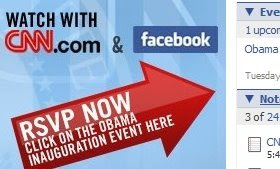 To all Americans, today is a significant day for most south of the border. Most are celebrating the man known for his "I have a dream" speech. The youngest winner of the Nobel Peace Prize and the list goes on. But starting tomorrow there will something much relative to all this it will be the inauguration of Barack Obama as the first "Black President". This will be the first time that technology will play an important part in this important time in Internet history. Most blogs,websites and social networking sites are a buzz with Obama frenzy. This has captured the imaginations of those in America and around the world. This to me will be a significant historical event that will be viewed online on the internet throughout the world.

CNN has a promotion is which you RSVP @ facebook.com/cnn

Check it out on FACEBOOK with your friends.
Posted by clickflick at Monday, January 19, 2009