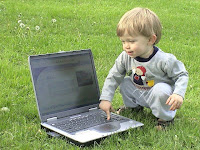 I begin by stating I'm in my mid 30's. The first time I used a computer was probably when I was in 2nd year of college. I was probably only in my late teens. The first computer I purchased was a PowerMac 7200 for you Mac addicts. At that time the computer cost almost $5,000. Spending that amount of money during that time was a lot of money for a Mac computer. The specs on the computer went something like this: 75Mhz, Maximum RAM was 512Mb and it used the floppy disk that held 1.44mb. Move forward to today and you can get a more powerful and faster computer for less than $1,000. The key change here is to see how fast and far we have come with technology. It is more evident with children today. I have a niece who is uploading videos and creating webpages at the age of 12. She isn't even in her teens yet. I also have a younger nephew who is already on the web and playing video games all day. Can you imagine kids already using computers as young as 5yrs old. I didn't even touch my first computer until I was in high school. With the rise of information on the internet, learning for kids today will be different from how we were previously taught. For example, when I was growing up I had to memorize, I had to go to the library to find research for my projects. I had to carry so many textbooks to school from one class to another. Children today have a lighter load to carry around. Some may just bring their laptops to school. No longer do they have to go to the library since they can just "Google" the information they need. No need to memorize equations or formulas because it's all on the computer in a form of a widget. Learning for children has definitely changed. It's not about finding information anymore, it's more about controlling the information. Growing up with all this technology should have a profound affect on their future. Let's just hope it's a good thing for them.
Posted by clickflick at Friday, March 06, 2009

Email ThisBlogThis!Share to TwitterShare to FacebookShare to Pinterest
Labels: technology

This is so true i myself have a niece and 5 nephews who all use the internet and own there own computer and the oldest is 15 years old to 8 years old...thanks for the update...