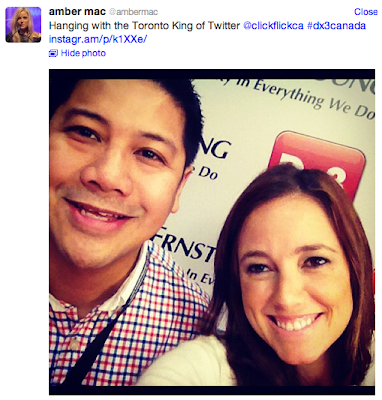 I cannot believe it's been 3 years since I first started using this Social Network called Twitter. It has truly been a blessing with so many highlights to remember. I have learned so much from this tool. It has enabled me to meet lots of new friends and enjoy many new experiences. I been able to receive many opportunities and learn from many mistakes. I've been on Twitter constantly learning and importantly listening. I've been able to use this thing called #ICE Interact, Communicate and Engage on Twitter. It makes Twitter more fun to use. I've been able to work with many brands and be able to connect with many influential people. Amber Mac who is a respected best selling author/tv host and a Social Media expert tweeted recently the above tweet/photo at a digital show. This tweet actually meant a lot to me coming from her because she is someone who has knowledge of Social Media. I've listened and watched her since the early days with Leo Laporte so this tweet was a very nice and an unexpected compliment. It just shows you the power that Twitter can influence in many different ways. Twitter has not only open a great network online but offline "In real life" has just been as important. I've organized over 40 Tweetups including RegiftTO this past 3 years on Twitter and I'm very proud to state this because it takes a lot of work and hours to organize. So I "Thank You" and reflect on all the positive things on this 3 year anniversary. Twitter has really given me so much that I want to give back. It's a motto I live by. If we make others better around us everyone succeeds. Simple, right? :-)

On that note as a "Thank You" I will have a Twitter giveaway:

I'll be giving away 3 different prizes: Passes to Rogers Centre Tour, free hairstyle from Evoke Salon and a wing dinner from St. Louis Wings! All you have to do is tweet me what I tweet every morning on Twitter:

I'll select winners tomorrow and mail out your vouchers. Thanks again for following and reading my tweets and this blog.
Posted by clickflick at Friday, February 03, 2012

Thank YOU! Jo for being such a conversation igniter :)
I can honestly say my favorite connection from twitter has been you & your energy you bring to the #ICE philosophy of conversation.