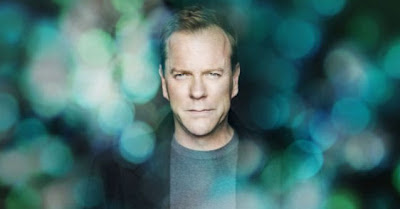 The folks at Global TV are introducing the new show "Touch" starring canadian actor Keifer Sutherland. The show premieres on Thursday March 22nd at 9pm ET. Kiefer's character is to make a difference in people's lives because of a text message he receives on a lost cell phone and his relationship with his son who seems to be psychic or of a higher being. I watched the trailer and it's intriguing. What if coincidence was a calculation?

In conjunction with the tv show premiere a cross promotion has occurred that promotes social good. Global has given me a phone to post a pic of something that has touched my life (big or small) For me it's food lately. I enjoy food because it's the most social thing to do. It touches upon all the human senses such as taste, touch and smell. Now the cool part about this promotion is that for every photo uploaded to Globaltv.com from the phone 10 cents will be donated to The Children's Wish Foundation. The images can be viewed on the site. If you don't have the phone you can still participate by emailing a photo to touch@globaltv.com or texting to 101010 with your image. 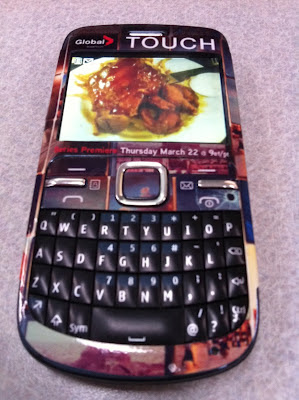 Hmm it appears like your blog ate my first comment (it was super long) so
I guess I'll just sum it up what I had written and say, I'm
thoroughly enjoying your blog. I as well am an aspiring blog
writer but I'm still new to everything. Do you have any points for rookie blog writers? I'd genuinely appreciate it.

I blog often and I seriously appreciate your information.

The article has really peaked my interest. I'm going to bookmark your blog and keep checking for new information about once per week. I subscribed to your Feed too.

If you want to take much from this paragraph then you have to apply these methods to your won weblog.

I do not leave a comment, but I read some of the comments on "Global TV premiere of Touch.".
I do have a couple of questions for you if you do not mind.
Is it just me or does it look as if like a few of the comments appear as
if they are coming from brain dead folks? :-P And, if you are writing on other places, I would like to keep up
with everything fresh you have to post. Could you list of the complete urls of your social sites like your twitter feed, Facebook page or linkedin profile?

Ahaa, its fastidious dialogue concerning this article here at this website, I have read all
that, so at this time me also commenting here.

Inspiring quest there. What occurred after? Take care!

Thank you for the auspicious writeup. It in fact was a amusement account it.
Look advanced to far added agreeable from you! By the way, how could we communicate?


Feel free to surf to my webpage eazol

I will right away take hold of your rss feed as I can't find your email subscription hyperlink or e-newsletter service. Do you've any?

Please allow me understand in order that I may
just subscribe. Thanks.

Hey there excellent website! Does running a blog such as this take a massive amount work?
I have absolutely no understanding of coding but I had been hoping to start my own blog soon.
Anyway, if you have any ideas or tips for new blog owners please share.
I know this is off topic nevertheless I just wanted to ask.
Kudos!

Admiring the hard work you put into your blog and in depth information you present.
It's good to come across a blog every once in a while that isn't the same unwanted rehashed information.
Fantastic read! I've saved your site and I'm including your RSS
feeds to my Google account.

Have a look at my page - total curve

I do not even know how I ended up here, but I thought this post was good.

I do not know who you are but certainly you're going to a famous blogger if you aren't already ;) Cheers!

What's up everyone, it's my first pay a visit at this website, and piece of writing is genuinely fruitful designed for me, keep up posting
these types of posts.

Here is my blog post; juicing recipes for juicers

Superb, what a web site it is! This web site presents helpful information to us, keep it up.

Hello friends, its fantastic article about cultureand entirely explained,
keep it up all the time.

Feel free to surf to my site :: summervilleconnect.com

Hey very nice site!! Guy .. Beautiful .. Superb .. I'll bookmark your website and take the feeds additionally? I'm happy
to find so many useful info right here in the submit, we'd like develop more techniques on this regard, thanks for sharing. . . . . .

This is very interesting, You're a very skilled blogger. I have joined your rss feed and look forward to seeking more of your fantastic post. Also, I've shared your site in
my social networks!

I'm gone to say to my little brother, that he should also visit this website on regular basis to take updated from hottest reports.

Hi there colleagues, good piece of writing and good arguments commented here, I am really enjoying by these.

Aw, this was an exceptionally good post.
Taking a few minutes and actual effort to create a top notch article… but what can I say… I
procrastinate a whole lot and never manage to get nearly anything done.


Look at my site - consciente.de

I absolutely love your blog.. Great colors & theme.
Did you create this site yourself? Please reply back as I'm looking to create my own personal website and want to find out where you got this from or exactly what the theme is named. Many thanks!

Good day I am so excited I found your blog, I really
found you by mistake, while I was looking on Google for something else, Anyhow I am
here now and would just like to say cheers for a fantastic post
and a all round thrilling blog (I also love the theme/design), I don’t have time to go through it all at the moment but I have bookmarked it and also
included your RSS feeds, so when I have time I will be back to read a
lot more, Please do keep up the superb work.

Its such as you read my thoughts! You appear
to know a lot about this, such as you wrote the book in it or
something. I believe that you simply could do with a few % to power the message house a
bit, but instead of that, this is magnificent blog. An excellent read.
I'll definitely be back.

Your style is really unique in comparison to other people I've read stuff from. Many thanks for posting when you've got the opportunity, Guess I'll just bookmark this site.

This may help in transporting nutrients towards the body plus cleansing
the liver of toxins. Phen375 is shown to stop the cravings that normally cause a diet to fail.
If you're much older than 50 looking to lose just a little weight, you might start to wonder if there can be a difference within the approach you use versus somebody who is younger.

Hello, Neat post. There's a problem along with your website in web explorer, would test this? IE nonetheless is the market chief and a huge component of folks will miss your fantastic writing because of this problem.

An outstanding share! I have just forwarded this onto a friend who was
conducting a little research on this. And he actually ordered
me lunch simply because I discovered it for him.
.. lol. So let me reword this.... Thanks for the meal!
! But yeah, thanx for spending time to talk about this matter here on
your web page.

First of all I want to say awesome blog! I had a quick question in which I'd like to ask if you don't mind.
I was interested to find out how you center yourself and clear your head prior to writing.

I've had a tough time clearing my mind in getting my thoughts out. I truly do enjoy writing but it just seems like the first 10 to 15 minutes are generally wasted simply just trying to figure out how to begin. Any ideas or hints? Many thanks!

If you want to get a great deal from this piece of writing then
you have to apply these strategies to your
won webpage.

It's a pity you don't have a donate button! I'd certainly donate to this fantastic blog! I guess for now i'll settle for book-marking and
adding your RSS feed to my Google account. I look forward to new
updates and will share this blog with my Facebook group. Talk soon!

Hello there! This is my first visit to your blog! We are
a collection of volunteers and starting a new initiative in a community in
the same niche. Your blog provided us useful information to work on.
You have done a wonderful job!

Nice post. I was checking constantly this blog and I am inspired!
Very helpful info particularly the remaining phase :
) I handle such info much. I used to be seeking this certain info for a very
long time. Thanks and good luck.

Here is my blog post; gift ideas for men

It's a pity you don't have a donate button! I'd without a doubt donate to this outstanding blog! I suppose for now i'll settle for bookmarking and adding your
RSS feed to my Google account. I look forward to fresh updates and will talk about this site with my Facebook group.
Chat soon!

If some one wishes to be updated with hottest technologies afterward he must be pay a visit this site and be up to date daily.

I am now not certain the place you are getting your information, however great topic.
I needs to spend a while learning much more or working out
more. Thanks for fantastic info I used to be looking for this info for my mission.

Hi, I do think this is a great web site. I stumbledupon it ;)
I may come back yet again since i have book marked it. Money
and freedom is the best way to change, may you be rich and continue to guide other people.


Here is my webpage: http://bowtrolcoloncontrol.herbalcurenow.com

This is very fascinating, You are a very skilled blogger.
I have joined your feed and stay up for in the hunt for extra of your great post.
Additionally, I have shared your website in my social
networks

Look at my web page: buy deer antler Plus

What's up, after reading this awesome paragraph i am also delighted to share my know-how here with mates.

Here is my weblog :: mexico food

An interesting discussion is worth comment. I do think that
you need to write more about this topic,
it may not be a taboo subject but typically people do not talk about these issues.

To the next! Cheers!!

I was suggested this web site through my cousin. I'm no longer sure whether or not this post is written through him as no one else recognise such specified about my trouble. You're
amazing! Thanks!