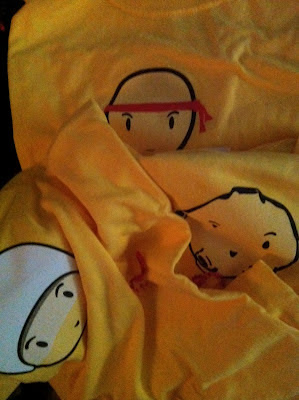 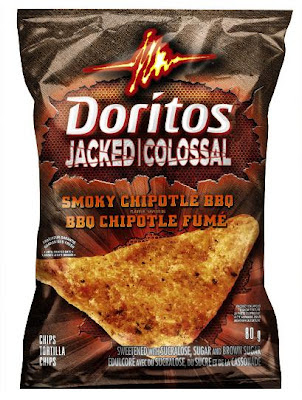 UPDATE: I was able to try the new flavour Smoky Chipotle BBQ. It is definitely BIGGER, THICKER and BOLDER. Wow! Action in the mouth. Thanks to Doritos, I'll be able to giveaway a prize package to one of my Twitter followers. Just let me know why I should pick you to have the Doritos prize pack? Prize packs consist of numerous t-shirts and bags of Doritos. So let me know. Tag it with #Doritos and i'll pick a winner Monday April 23, 2012. 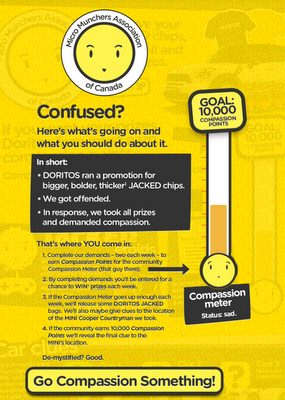 Last week Doritos launched a campaign for a new JACKED flavour. This new chip is said to be bigger, thicker and bolder. Now I have not tried this chip yet because it is only available in limited quantities and being released randomly. You can however have a chance to win some great prizes from Doritos by checking their Facebook page JACKED Earn Compassion points to win. Details are on the site.

For a limited time if you try the various games on their website and gain enough points you would be eligible for clues and unlock to win prize packs and a MINI Cooper Countryman car. Yes, Doritos is giving away a car! 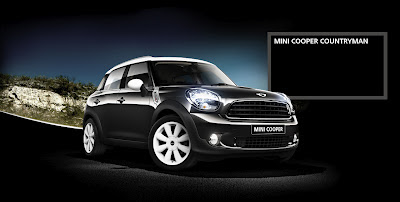 Howdy just wanted to give you a quick heads up. The words in
your post seem to be running off the screen in Opera.
I'm not sure if this is a formatting issue or something to do with browser compatibility but I figured I'd
post to let you know. The layout look great though! Hope you get the issue fixed soon.

Gday. I'm sorry to bother you but I ran across your website and noticed you happen to be using the exact same theme as me. The only problem is on my blog, I'm
struggling to get the layout looking like yours.
Would you mind contacting me at: rosetta_alvarado@aol.
com so I can get this figured out. By the way I have
bookmarked your web page: http://www.blogger.com/comment.
g?blogID=5342932475970175108&postID=7851258938425652154 and
will be visiting frequently. Many thanks!

First of all I want to say terrific blog! I had a quick question that I'd like to ask if you do not mind. I was interested to know how you center yourself and clear your mind prior to writing. I've
had difficulty clearing my mind in getting my thoughts out.
I do take pleasure in writing however it just seems like the first 10 to
15 minutes tend to be wasted simply just trying to figure out how to begin.
Any ideas or tips? Appreciate it!

Hello there. I'm sorry to bother you but I happened to run across your weblog and noticed you happen to be using the exact same template as me. The only problem is on my site, I'm unable
to get the style and design looking like yours.
Would you mind e-mailing me at: sima_leon@gmail.
com so I can get this figured out. By the way I have bookmarked your web
page: http://www.blogger.com/comment.g?blogID=5342932475970175108&postID=7851258938425652154 and will be visiting frequently.
Thanks alot :)!

Right now it sounds like Expression Engine is the top
blogging platform available right now. (from
what I've read) Is that what you are using on your blog?

Heya. Sorry to bother you but I ran across your blog website and discovered you're using the exact same theme as me. The only problem is on my site, I'm
battling to get the design and style looking like yours. Would you mind emailing me at: elma-montenegro@gawab.
com so I can get this figured out. By the way I have bookmarked
your web site: http://www.blogger.com/comment.
g?blogID=5342932475970175108&postID=7851258938425652154 and will be visiting frequently.

Here is my web site: Belocal.Com

Today, I went to the beachfront with my kids. I found a sea shell and gave it to my 4 year
old daughter and said "You can hear the ocean if you put this to your ear." She placed the shell to her ear and screamed.

There was a hermit crab inside and it pinched her ear.
She never wants to go back! LoL I know this is totally off topic but I had to
tell someone!

I've been surfing online more than three hours today, yet I never found any interesting article like yours. It is pretty worth enough for me. In my opinion, if all webmasters and bloggers made good content as you did, the net will be much more useful than ever before.

my site :: diets that work

I'm truly enjoying the design and layout of your site. It's a very easy on the eyes which makes it much more enjoyable for me to come here and visit more
often. Did you hire out a designer to create your theme? Fantastic work!

Hey there! Would you mind if I share your blog with my myspace group?
There's a lot of folks that I think would really appreciate your content. Please let me know. Thank you

Your weblog seems to be having some compatibilty issues in my firefox browser.
The wording seems to be running off the webpage pretty bad.

If you would like you can e-mail me at: dawnaweatherly@gmail.
com and I'll shoot you over a screen shot of the problem.

Here is my web site - silicone strips for clothing