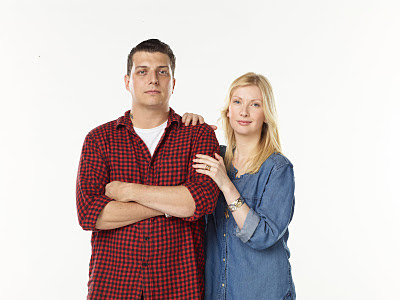 I had the opportunity to be invited to Corus Entertainment for an exclusive pre-screening of "GasTown Gamble" with Mark Brand. Mark Brand is one of the main characters in this new series premiere that will be shown tonight on the Oprah Winfrey Network at 9:30pmET and repeats at 11pm on Friday. If you are on the Rogers network that would be channel 72.

Mark Brand is owner and partner of Mark Brand Inc. empire, he is one of Vancouver's most prolific and successful independent restaurateurs. Mark owns and operates 7 businesses including a clothing line. You can find more about it here at Mark Brand

The premise of this show is Mark and his wife take a gamble on resuscitating Vancouver's iconic "Save-On-Meats" butchershop/restaurant in one of Vancouver poorest neighbourhoods. He hopes to revitalize the Vancouver Eastside neighbourhood by involving the community. The cast of characters are introduced in the first episode. I think the success of the show will be based on these characters if you watch tonight. I watched the 1st episode and already want to watch the next one to see how the witty and interesting characters develop. One character that peeked my interest is Football Mike. 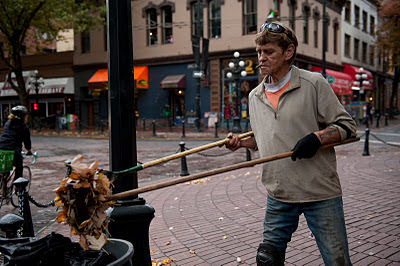 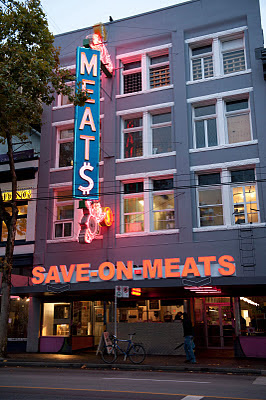 
Meeting Mark Brand in person and listening to a Q/A after the screening tells me that this guy is really down to earth and someone that most of us can relate to. He's a cool dude doing his thing and I found that enticing of his character. He is successful with his business but for him to take on this project with Save On Meats is like a challenge and leap of faith for him. He truly has the interest of all those involved in the community and is doing social good with social enterprise. Below is a snippet of the Q/A. The question is how is he going to attract customers to his butcher shop/restaurant.


Overall, the dynamics of the Mark and his wife and the interesting characters make for an intriguing concept. Trying to run a restaurant/butcher shop with limited experience and in one of the poorest neighbourhoods laced with drug addicts and homeless make for great tv watching with a social spin. Here's a sneek preview GasTownGamble 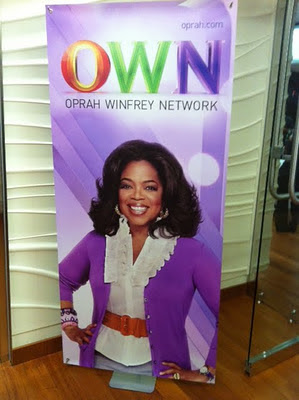 Posted by clickflick at Wednesday, January 18, 2012

greetings. I too, am waiting anxiously for the nest episode. Having lived on the DEside, I am curious to see how this plan will be developed.
Happy watching!

I'm really loving the theme/design of your site. Do you ever run into any web browser compatibility problems? A couple of my blog visitors have complained about my website not operating correctly in Explorer but looks great in Safari. Do you have any ideas to help fix this issue?

My web blog usb cable for a nikon l 22 camera

Howdy! I know this is kinda off topic nevertheless I'd figured I'd ask.
Would you be interested in trading links or maybe guest writing a blog post or vice-versa?

My website goes over a lot of the same subjects as yours and I think we could greatly benefit from each other.

If you might be interested feel free to shoot me an e-mail.
I look forward to hearing from you! Excellent blog by the way!

Paragraph writing is also a excitement, if you know afterward you can write if not it is complicated to write.

A visit to Ghana in west Africa by all of us of three people invoked themes that apply on the whole continent.
The building has become competitively priced and its particular location and prestige allow
it to be the sleeping giant Sleeping Giant may refer to:.
around and see what one in the most up-to-date styles are and if you discover something
you prefer essentially essentially the most, discover out who's offering it inside the greatest price.

Look at my web-site; Nike Free 3

In addition, some fabric coolers include multiple or outside zipper pockets and mesh sleeves to hold utensils, napkins, as well as any
other small accessory items. The river Pamba, which flows nearby the foothills of the shrine, plus which devotees
have a customary bath before climbing uphill for the temple, is also under the care with the Kerala State Biodiversity Board.

3 Issues To Maintain In Mind Once you Are Searching for A Hand.

The Mighty Big Bag clearly was the most popular at $12 --
more than 2500 bags were sold. He moved in with a friend,
while Taylor-Mc - Coy, attracting just $410 each month in government assistance, checked in
a shelter. The aim is to call such homeowners and urge these
to upgrade with a second bin or a larger one, he was quoted saying.


Here is my site ... chanelbagsoutletssale.com

The shop is owned by charity Norwich HEART, which took it
over in August 2009 after a successful campaign by Norwich Evening News to keep the shop open.
Using a damp forefinger, apply salt directly
in the blisters. around and see what one with the most up-to-date styles
are and when you discover something you want essentially probably
the most, discover out who's offering it in the greatest price.

Thanks for an thought, you sparked at thought from a angle I hadn’t given thoguht to yet.
Now lets see if I can do one thing with it.

My site - i'm having trouble getting pregnant

My coder is trying to persuade me to move to .net from PHP.
I have always disliked the idea because of the costs.
But he's tryiong none the less. I've been using Movable-type on various
websites for about a year and am nervous about switching to another platform.
I have heard great things about blogengine.net. Is there a way I can transfer all my wordpress posts into it?
Any help would be greatly appreciated!

Hey! I understand this is kind of off-topic but I had
to ask. Does building a well-established blog such as yours require a
massive amount work? I'm brand new to operating a blog however I do write in my diary every day. I'd
like to start a blog so I will be able to share my experience and thoughts online.

Please let me know if you have any suggestions or
tips for new aspiring blog owners. Thankyou!

Have a look at my blog post; counter depth refrigerators samsung

Feel free to surf to my web page: used refrigerators **

Right away I am going to do my breakfast, once
having my breakfast coming yet again to read additional news.