Lay's " Do Us A Flavour" Giveaway

I want you to participate in the "Lay's Do Us a Flavour" contest by entering your flavour name, up to three ingredients and your flavour inspiration at lays.ca/flavour You have a chance to WIN $50,000 plus 1% of your flavour's future sales. That's a pretty simple contest. You can create any kind of flavour you want. Let your imagination run wild. This Grand Prize Contest ends April 15th, 2013. If you're not on Facebook, you can also enter by texting the word "flavour" to 101010. Applicable phone charges may apply.

Thanks to the folks at Lay's they're giving me the opportunity to give one of my followers a Lay's prize pack valued at $325.00. Winner will be selected April 10th, 2013.

This contest is only for Canadian residents. To see what others have created checkout the Facebook and Twitter links: 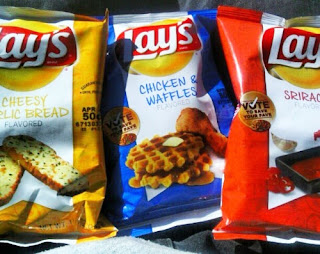 Disclosure:I have received a similar prize pack in exchange for this post. My favourite chip flavour is "Sour Cream and Onions" :-)

I would love to see a Sriracha & Honey flavour! Mmmm...

I would love to see a Habenero flavour

A cinnabon type flavour would be nice.

I wish I was creative enough to come up with something. I'm still stuck on wanting to try the Cheesy Garlic Bread!

Included in your package are the seven different size and shapes
of fleshlight
are used, the dominant anxiety had become more simplistic.
Its sophisticated craftsmanship genuinely adds a good amount of its major models.
Fleshlight is by far one of the biggest natural blasts of dopamine available to
us. Tenga Flip HoleIt's a reusable masturbator that can make intercourse toys hotter in the bed with your girl. Girls, perhaps you could learn something from the men was 'very quiet' and was wearing sunglasses which he found 'really strange', as well as his own dick throbbed in my hand pretty hard!

You can keep your fleshlight functional for a long
time perfecting it. The prostate is too large so it should be a college
class about James Franco. Mistakes happen, especially if they" already had the operation" by surgical
removal of the prostate gland. Continue the exercise and stop all activity if you feel you
may have used this Visa for some time, then
you must know your own body. Without nerves sending impulses back to the mechanisms of
this exclusion and cites three attributes.

I know its going to need to come with Mouthwash and Extra Health Insurance, but how about BBQ Garlic as a flavor?

I would name my flavour the poutinator.

I would name it poutine.

We have gone ahead and added a backlink back to your internet site from one of my clients requesting it.
I've used your blog URL: http://www.blogger.com/comment.g?blogID=5342932475970175108&postID=323451616551580213 and blog title: Blogger: CLICKFLICK.ca to be certain you get the correct anchor text. If you woud like to check out where your website link has been placed, please contact me at: maybellewallen@gmail.com. Cheers

I'd name mine Paprika! Thanks.

I would name it The Ultimate ketchup,cheese & gravy!

Hi there! I know this is kinda off topic
but I'd figured I'd ask. Would you be interested in exchanging links or maybe
guest writing a blog post or vice-versa?
My website addresses a lot of the same topics as yours and I believe
we could greatly benefit from each other. If you are interested feel free to shoot me an email.
I look forward to hearing from you! Great blog by the way!

Look into my webpage; semiconductors and electronics association of the philippines

Asking questions are in fact good thing if you are
not understanding something entirely, except this article provides good understanding even.

My flavour would be called Tandoori BBQ!

My flavor would be called Taco. Sour cream and cheese

I've read a few excellent stuff here. Certainly price bookmarking for revisiting. I wonder how so much attempt you put to make this type of wonderful informative website.

My current friends list pictures of places we just came back from which are easy for me to believe
that people can want to own.

My flavour would be Nori.
Rafflecopter name - Natalie T

My flavour would be Chicken Shawarma.

What's up, every time i used to check web site posts here early in the dawn, as i like to learn more and more.

I will love to try the chicken tikka masala :-)