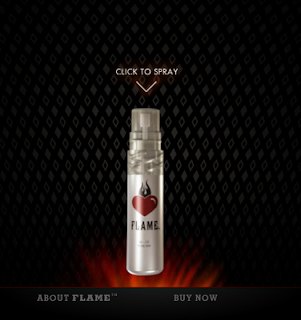 I was watching the local morning show this morning and they introduced something that caught my attention. They had introduced a cologne that "Burger King" is selling exclusively in New York.
It's basically a cologne that has influences and originates from the "Whopper". I'm not sure if that would be a "Turn on" for the opposite sex, but it would be interesting to actually smell. This is being sold online at this site http://www.firemeetsdesire.com . The site will redirect you to a 3rd party site that actually sells the product. Yesterday, I had also posted a "touched up" image of Rihanna. For those of you not aware of the story, let me recap it for you. Rihanna and her boyfriend were set to perform for the Grammy awards. The night before they were invited to a party hosted by Clive Davis. During that night there have been reports they both got into a domestic dispute in which Rihanna was bruised and injured. I thought to myself, "How come there are no photos to prove this?", so I decided to make one up for fun. It took me 5 min to make one up and I posted it online to friends and across Twitter. I definitely had over 75 unique hits within 1 hour of posting. This was a viral type of marketing of a different kind for me. It was shocking for the response I got in such a short time for this blog. Now I'm just waiting for Chris Brown or Rihanna to sue me !!! It's all about Fire and Desire, right!
Posted by clickflick at Wednesday, February 11, 2009