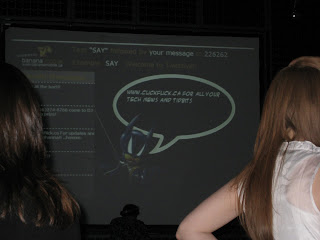 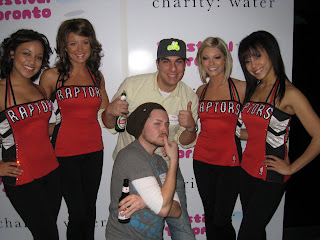 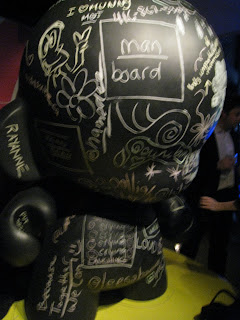 This was an amazing event in which a downtown nightclub was turned into a Technology Circus. There were numerous people from all walks of life. You had media types, students, geeks and even your average "Joe". Twestival 2009 to recap is an event held at over 175 cities on the same day where all the money goes to charity. It is organized by volunteers and students. The money raised will help bring clean water to developing nations. This event was promoted through various websites including Twitter. Actually most of the people at the event were Tweeters! The festivities began with a complimentary beer ( can't go wrong with that ). There are also 2 adjacent rooms with large projected screens with live feeds and live twittering. Most attending used there iphones or cellphones to text messages on the screen for all attending to see. It was quite funny because you would have some weird messages posted like "Free Beer" or "Who's the stripper with the short skirt?", so you can just imagine the later the night went the more interesting the messages. This was all streamed live and over the internet too. The true social aspect of this event was that it truely a networking event in which I've met numerous people who pursue similar interest as me. It also helps spark interest and ideas for future collaborations. To add to the event they had Dj's spinning cool music, Raptors cheerleaders taking pictures and also various media filming this event. I'm sure the event next year will be bigger and better when big sponsors find out about this event. Some pics and videos will be posted soon
Posted by clickflick at Friday, February 13, 2009

I have just downloaded iStripper, and now I can watch the sexiest virtual strippers on my desktop.