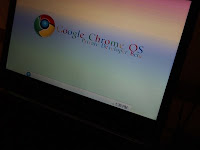 Yesterday, Google announced that they will be introducing their own OS. It will be called the Google Chrome OS. This will easily add a new competitor against Microsoft and Apple. Google mentioned some of the features of the OS

•Open Source and therefore will be free

•Google is partnering with Adobe, HP, Qualcomm and Texas Instruments

• 80% of the OS will deal with Google Applications

It looks like Google is slowing making the whole web integration a much easier way to use which will make this popular.
I'm a diehard apple fan but have been thoroughly impressed with Google so far. Maybe we can see a joint venture with Apple and Google in the future? right now I think this will affect Microsoft the most. It will be interesting to see how they react.

On a side note, with the recent passing of Michael Jackson he has broken so many records. He has the #1 album of all time.
He has been on the number 1 charts for 37 straight weeks which is a record. Now he can add $1 million downloads from the internet in one week. No other artist has been able to do this in this interenet age.
Posted by clickflick at Thursday, July 09, 2009