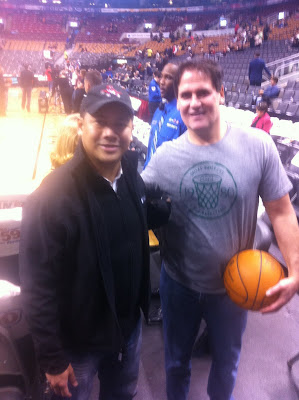 It's the one and only Mark Cuban. Owner of Dallas Mavericks and Reality show superstar.

This past weekend I was invited to the 1st ever "Raptors Social Media" event. As you know I'm a fan of the Toronto Raptors and Social Media. To combine both interest was just an ultimate and unique experience for me. I find it interesting and smart that the Raptors organization has reached out to the fans using the Social Media channels. It's a level of engagement that is unprecedented within major sports organizations in Toronto. You will begin to see other teams follow suit. Open to anyone at a special discount via Social Networking sites such as Twitter and Facebook you had a chance to be invited to pre-game shootaround before the general public. This exclusivity brings value from a "Fans" perspective. We also received t-shirts from the @rtzfans who spearheaded this event in conjunction with the Toronto Raptors. If that wasn't enough we also got the opportunity to meet one of the players post game. In this case we met @Jerryd Bayless better know as the emerging young point guard for the Raptors. It was only fitting that he be the player selected for the postgame interview because he himself is an avid user of Social Media. He maintains his own blog and Twitter handle.

Here is Jerryd Bayless talking about playing in Toronto

Just want to Thank @RTZfans @Joelreilly @Nat77 @Bigthinkerjon @Raptors for making this all come together! Here's a quick look into the shootaround with Joel Reilly.

For more info on the night, check out RTZfans
Posted by clickflick at Tuesday, March 01, 2011