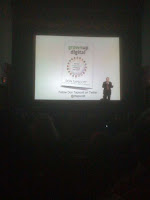 Who is Don Tapscott? Don Tapscott is a business executive, consultant and speaker specializing in technology and business and society. He has written over 11 books including the top seller called "Wikinomics". Don Tapscott had made a presentation yesterday with a showing of a documentary/movie called "Us Now". It is about a movie in which the internet or social media can affect social change and how this can change the way we live. Here is a quick preview below:

You maybe wondering why I would venture to this event. The reason is quite simple. I think we are now in a phase in society where there will be change coming and we can already see it with the economy and the way governments are changing. Technology has made a big influence on this change. Don Tapscott is visionary in the way technology will influence us and our surroundings. What is happening around us in 2009, Don was already talking about it in 2007. So I knew he had the knowledge and forsight. In the movie he basically states how we as an internet nation can create change socially.
The internet is full of information and has basically become one big computer of information. For example, you can go to a doctor and ask for a recommendation on an ailment, but you can also ask the same question on the internet with hundreds of people responding. Would you trust the judgement of one doctor or the judgement of various people who may have experienced your ailment already? This is just an example of how powerful the internet has become. This leads to the question, Why do we need to re-elect government every 4 year in which those running for election pick the platforms they think are important to society. Why can't we just choose what is important via the internet and go with majority think is important? That sounds more like democracy right? Don showed examples of how the internet can create social change. He showed it through how these sites work: Couchsurfing This site allows people to use other registered users couches in other countries in a Ebay ratings style format. Interesting right? Or how about a bank that lends you money by the other users in the bank like this site: ZOPA These are just a few examples of how internet has been changing things around us. Before the internet was all about "HTML" which is presentation, how a website looks. Now the internet is all about "XML" which is computation. It's like mapping the whole world digitally now. Everything now is becoming digital. Your id card you use to swipe in to work has a chip with an IP address. Your cellphones can now geo-tag your location.
We are living a new era of change. This is why it was interesting to listen to Don Tapscott. He made a point that we are seeing live before our eyes on tv. President Obama is not only the first black president but he is the first president to embrace the internet. He has decided to make everything transparent for all to see through his platforms and decisions on the internet.So you can view on the internet where the money is being spent and leaves little room for mistakes by our politicians.
This will be an interesting time for all and can't wait to see what the future holds for all of us.
Posted by clickflick at Friday, February 27, 2009