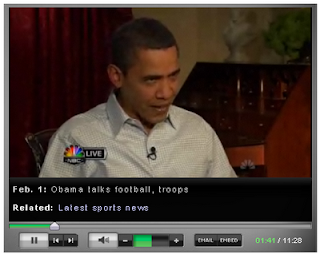 OBAMA INTERVIEW
Click the above link for the full video coverage.

You don't have to be a big sports fan to enjoy yesterday's Super Bowl game. There were pre-game festivities with Faith Hill and Jennifer Hudson singing the American National anthem with the jet fly-by. There was also an interview with Barack Obama prior to the game. The interview by "Matt Lauer" was very jovial and comedic at times which was conducted at the White House. Matt had asked questions like " Do you have your Blackberry on you ? "; "Can other world leaders call you on that phone ? " or "Does Oprah Winfrey have your phone number too ? ". The true interest to most watching on tv is the commercials and the half time show. This year they had Bruce Springsteen and the East Street band performing the halftime show. If you live in Canada you had to either watch ads which included Russell Peters or for websites such as this new one by CTVGlobemedia called www.autohound.ca . If you want to watch the expensive american commercials you can view them on this site
2009 SuperBowl Commercials
Referenced by Sean Percival.

The Autohound spots are pretty funny.