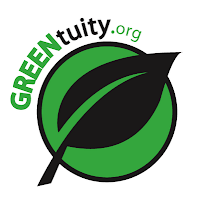 Every April 22, millions of people around the world celebrate Earth Day. Through various events, activities and environmental initiatives participants promote awareness of environmental issues. It seems to be the topic on most minds lately, which is the health of our own Earth. "GREENTuity" is an EarthWeek event which has already started on April 18 and goes through until April 26 to raise money and awareness for the Toronto Green Community. It was started with 6 local volunteers who met through social networking sites such as Twitter.

The name of GREENtuity was a play on word with "gratuity" and in this case, GREENtuity is a tip to the environment. How does the GREENtuity event work? When you go to a particpating locations, you can add a one dollar donation to your bill. All the money raised will go to the Toronto Green Community. Ultimately our goal is to help bring awareness and to help local green initiatives in Toronto. Toronto Green community was chosen because it is a local non-profit grass-roots organization. The money raised will go to future green iniatives. Some examples of their current programs are community gardens and summer camps for kids. Another example is the Apartment Greening Initiative which aims to divert up to 50% of waste in high-rise buildings.

This is the 1st year of this event and hopefully becomes an annual event that can hopefully make a difference even if it's a small change for the better. A small start can lead to bigger things. Just remember that Earth day began with just a few scientists and environmentalists that became increasingly concerned that pesticides and sewage were poisioning our air and water. Now it has become a world wide event that is so important today. The members of Greentuity is smaller in scale but can eventually affect change one step at a time. The group has also taken the initiative through the internet and social networking sites. One way for you to even help out today is to change your avatar on Twitter to " I Support Greentuity" avatar and you have a chance to win a $100 prize. Effectively this will help bring awareness to GREENtuity and their initiatives. If you would like to help the environment from the seat of your computer right now just go to AVATAR and "right click" and download and place into your Twitter photo. This will give you a chance at winning a prize that will be randomly selected on the last day of Earthweek. For more details about GREENtuity and how you can help support check the website at GREENtuity. If you do not live in the Toronto area and would like to support the cause donations can be made on the website.
Posted by clickflick at Wednesday, April 22, 2009